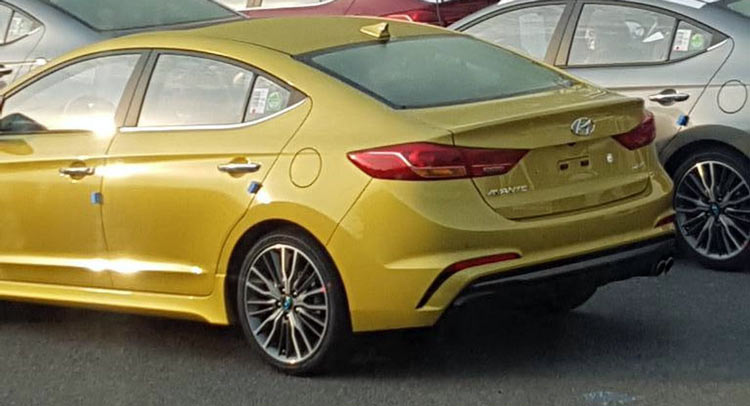 The South Korean based Hyundai carmaker is planning to introduce the hardcore version of the Elantra, the 2017 Elantra Sport, at the 2016 SEMA Show, in October, the model being caught on a spy shot with no camouflage in mother country.

Dave Zuchovski told Edmunds a couple of months ago that the 2017 Hyundai Elantra Sport would be aimed “at the performance enthusiast.” On the other hand, yesterday, Brandon Ramirez, Senior Group Manager of Product Planning at Hyundai, also said that the Sport version “will have unique styling on the front and rear, so significant changes.”

Judging from the spy photo released by Bobaedream forums, the 2017 Hyundai Elantra Sport in the United States would come with the same design as the one pictured here, which is particularly aimed for the Korean Domestic Market (KDM).

This means a lowered chassis complemented by the new front and rear bumpers, along with large corner ducts with extended chrome trims up front, rear diffuser with dual pipes, side skirts, revised head- and tail-lamp trims, beefier alloy wheels and so on.

Under the hood, chances are that the all-new 2017 Hyundai Elantra Sport would come with the 1.6-liter turbocharged flat-four cylinder with 200 horsepower, hooked to a seven-speed dual-clutch transmission, or the optional six-speed manual. The carmaker is yet to officially confirm the powertrains.

When it will arrive on the market next year, the 2017 Elantra Sport will be aimed at the Honda Civic Si or the Focust ST with 252 horsepower.