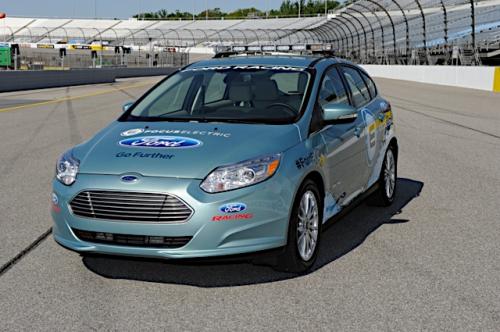 The Americans from Ford unveiled the Electric Pace Car version of the new Focus, a model which will be seen at the NASCAR Capital City 400 competition.

Under the bonnet of the electric Focus sits a 143-horsepower motor for a top speed of 136 km/h and a driving range of 161 kilometers. The American model uses a 23 kWh lithium-ion battery and is priced from $39,200 in the United States.

Ford also claims that the Focus Electric is the first fully electric pace car which will be present at a NASCAR race.

“After being unveiled in a public ceremony today at the Virginia State Capitol, the 2012 Focus Electric pace cars are ready for their historic race weekend when they become the first all-electric vehicles to pace a NASCAR Sprint Cup event,” says Ford.

A total of two zero-emission Focus vehicles will pace at the Capital City 400 race at the Richmond International Raceway. The Ford Focus Electric is currently produced at the Michigan Assembly Plant in Wayne.