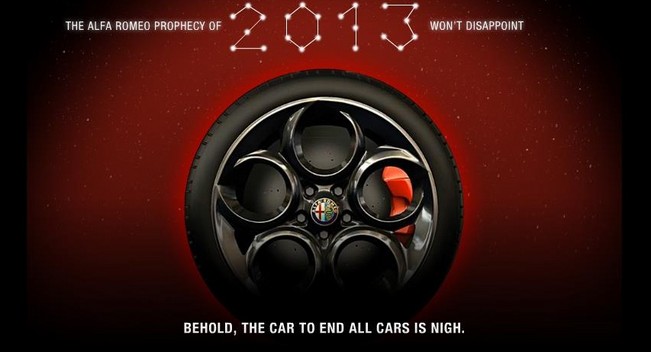 I like their food. Some of their women are interesting. The country itself is beautiful. Their roads can be tempting and their police often doesn’t seem to mind taking advantage of them.

But if there’s something really worth loving about Italy it’s definitely their cars. Though a lot of people still don’t get it, Alfa Romeo makes some of the best.

Constantly on the hunt for self improvement and pushing the automotive world forward, they are preparing the debut of the 4C.

Just before year’s end, happily they survived the apocalypse, the brand decided to tease the arrival of this new model.

It’s scheduled for a 2013 release and the official debut could take place at the Geneva Motor Show. That sounds amazing since that event is in March.

The teaser speaks of the Alfa Romeo 4C as the sort of vehicle which makes for prophecies. The car to end all cars sounds like another apocalypse, which is something it very likely will be.

For other manufacturers, a stunning small car with rear wheel drive, very low weight and a peppy turbocharged engine could spell big trouble in the sports car department.

So far, what we know about the Alfa Romeo 4C is that it will weigh less than 2000 pounds and with around 200 turbocharged horsepower.

I for one couldn’t say no if I could afford it. Those who do and will not buy one should probably get their head checked.