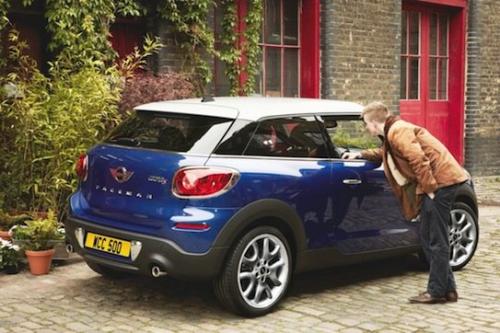 It seems that we have to opportunity to get a premature look at the new MINI Paceman thanks to the following leaked photos of the British model.

As you probably know, the new Paceman is basically a two-door variant of the MINI Countryman, sharing the same platform with the latter.

However, according to the British car maker, there are few differences between these two models such as the roof which is 1,7-inch lower and the ride which is also 0,4-inch closer to the ground.

Even, at least theoretically, you get less from the new MINI Paceman, some say that it will cost slightly more than the Countryman. Full details on availability and pricing will be released, without any doubt, at the upcoming Paris Motor Show.

In terms of engine range, the new Paceman will get exactly the same power plans as its five-door brother. Be sure to keep an eye on our blog as we will present more details on the new MINI Paceman as soon as the company makes it available.

One thought on “First leaked photos of MINI Paceman are here”