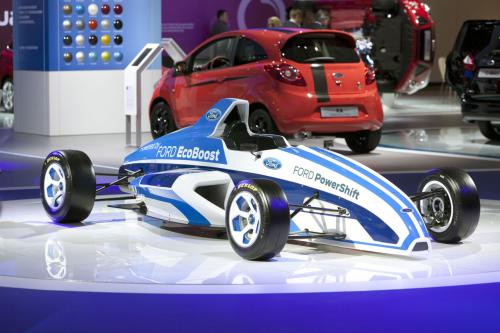 For as long as we can remember and for most specialist opinions, there’s only one name that matters in terms of bringing racing and power to the people.

It is Ford and it seems they’ve just decided to mix the two even more by coming up with a new Formula Ford racing series, using a very sleek looking machine.

With the audience and fan base giving something back, the Frankfurt Motor Show tells us it’s about to happen thanks to the Ford Ecoboost engine.

The newly available and highly acclaimed turbocharged engine will be placed in something that can’t be really labeled as a small hatchback.

The Formula Ford racer will be using the EcoBoost engine, in the 1.6 liter variation with a new “race-spec” tune worth performance which pushes out 165 horsepower and 162 lb-ft of torque.

It doesn’t seem like a lot even when sending all this power to the rear wheels, courtesy of a six speed sequential transmission but let’s not forget what the Ford Formula racer is about.

Even with a steel tube chassis, a driver and a full tank of gas, the Formula Ford racer shouldn’t end up weighing in any more than 900 or so pounds.

Courtesy of a great amount of work done to the aerodynamics, the Formula Ford racer received a full set of FIA certifications so that it can race on any track in the world.