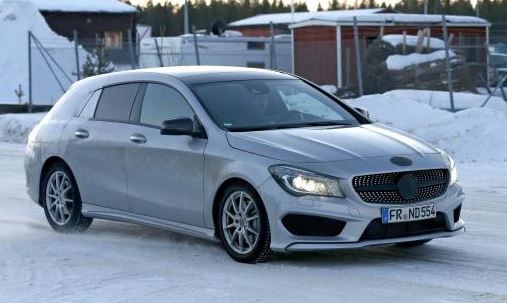 The Mercedes-Benz CLA Shooting Brake will enter the market in 2015, after the luxury automaker has confirmed the go ahead for the assembly line.

The CLA Shooting Brake will join the company`s lineup, meaning that it would stand next to the CLS and the CLS Shooting Brake version as well, which will also see the day light in 2015.

The Mercedes-Benz Shooting Brake will suffer some minor modification, coming with more practicality at the rear end, while the rest of the body will basically remain the same as the four-door coupe.

Even if the model is based on the bigger sibling, the Mercedes-Benz Shooting Brake will be standing however on the same platform as the CLA Coupe.

Thus, the model will share some similar components with the four-door coupe, coming as well with the same engine lineup under the hood.

Talking about power, it means that the Mercedes-Benz CLA Shooting Brake will sport the same turbo four-cylinder petrol and diesel units, being hooked to a manual, respectively to a seven-speed dual clutch gearbox or the 4MATIC all-wheel drive.