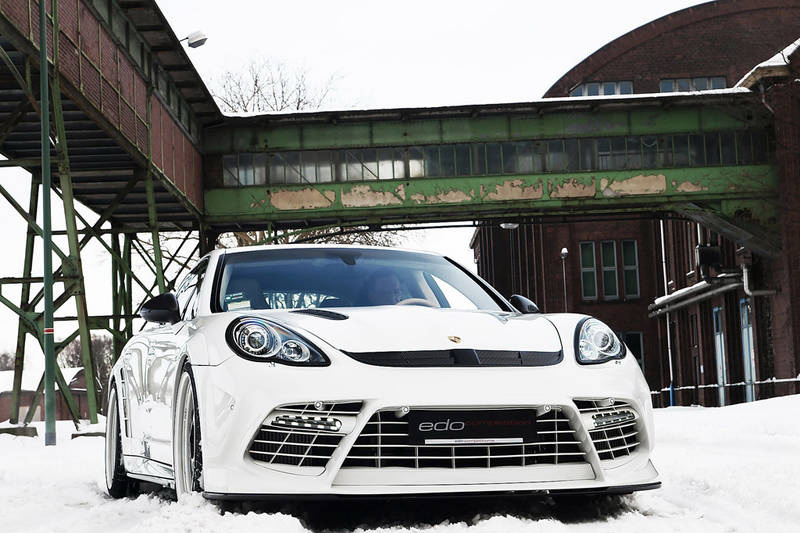 I’m among the wide variety of people who think the Porsche Panamera Turbo is ugly. I will not take this back.

However, I will say this. I wasn’t a fan of the Jaguar XJS when it originally came out and in its later years it stated to grow on me so who knows what will happen with the Panamera.

Looks are important in a car, especially in one that’s expensive and has a Porsche badge on it. While many tuning attempts have taken place, none have really taken over the imagination of the people.

Basically, if you start with the ugly duckling, there isn’t much to do with it.

This is why Edo Competition haven’t bothered much outside the wheel and a few other aesthetic details and instead focused on the performance.

Before we get to that, we should point out that 22 inch wheeled monster has been named the Moby Dick because of it’s awkward proportions.

So the fat is still there, but what about the beef? Well, the same twin-turbocharged V8 engine that Porsche put in the Panamera has been upgraded to now produce 750 horsepower.

The Panamera was an incredibly fast saloon when it had 200 horsepower less. At this stage it must be ludicrously fast. Actually, the Edo Competition Porsche Panamera Moby Dick is so fast that they limited the top speed to… 211 mph.

Given that and the fact that the Moby Dick will hit 62 in under four seconds it’s easy to see why the tuner chose this name which, apart from the novel reference, was attributed to a successful Porsche racer, the 935.