US: The 2018 Chevrolet Corvette ZR1 Gets Spy Video in Camo 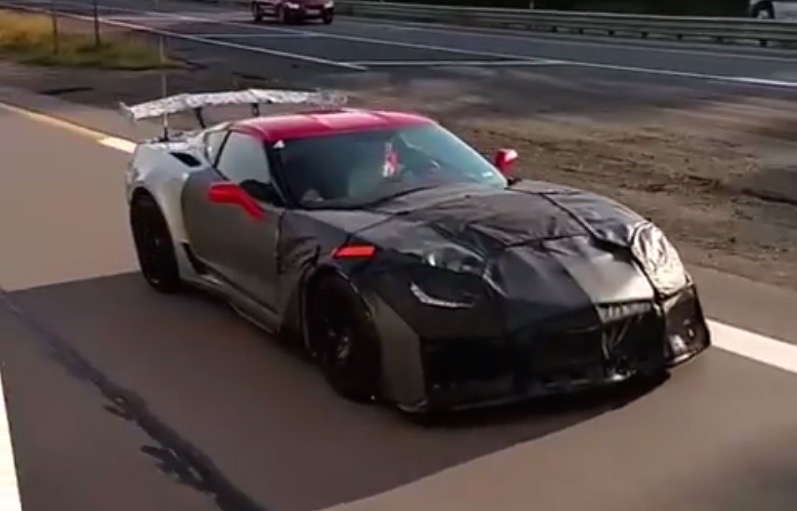 The North American based carmaker Chevrolet is busy testing out the hardcore Corvette ZR1, the model being caught in spy video while wearing camouflage on the streets in the United States.

Actually are dealing here with three ZR1 test mules, out of which a convertible version, wearing camouflage around the body, the spy video below being released online by a reader from IndianAutosBlog.

As we can see in the video, one of the cars` main highlight is the prominent rear wing, which improves their aerodynamics while going full throttle.

Besides the massive rear wing, the test mules seen here are also coming with composite body panels with red roof or side mirrors. And judging by the black covering, the front end is also likely to receive some major modifications.

As for performance under the hood, according to rumors, the all-new 2018 Chevrolet Corvette ZR1 might pack the company`s new LT4 engine, in the shape of a 6.2-liter supercharged V8, the same one found on the present Z06 – outputting 650 horsepower and 881 Nm of torque – and which might produce around 700 horsepower. And if the rumors are right, we might be looking here at the most powerful Chevrolet Corvette ever built.

The engine will be hooked to a six- or seven-speed manual transmission, adding the optional ten-speed automatic, sending the power to all wheels. Unfortunately, the full details with the test mule are not known at the moment, but we will be able to find out more in the following months, meanwhile, enjoy the spy video with the three ZR1s on the roads!