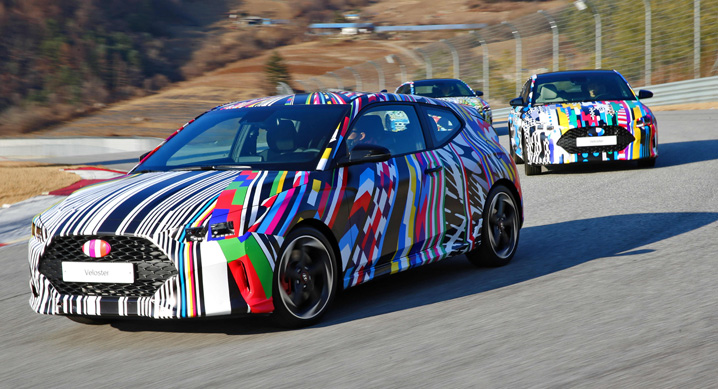 The South Korean based carmaker Hyundai is testing out its upcoming Veloster, an exquisite sports car that will be officially unveiled at the 2018 Detroit Auto Show, next January.

The first official images with the model have also emerged on the internet, the prototype wearing an insane camouflage which hides its exquisite and aggressive design language.

Once it will arrive on the market next year, the 2019 Hyundai Veloster is going to adopt the carmaker`s new design philosophy, also seen on other hot models like the i30. This means a rounder and curvaceous lines.

Starting with the front end, the model will get revised headlights, similar to those on the i30N, adding as well the now familiar cascading grille with three-dimensional theme. On the sides, it will also get the new body-sculpted skirts, while at the rear, it will come with a central-mounted exhaust system, also an innovation features of the carmaker`s new rides.

As for interior details, the all-new 2019 Hyundai Veloster will feature the latest technological gadgetries, like head-up display, electronic sound enhanced system for the engine sound, Hyundai`s latest touchscreen interface and so on. The new safety package will also come with lane departure warning or high-beam assistance, among the top features.

Performance wise, the new 2019 Veloster is going to adopt the already mentioned 1.6-liter turbo engine with a revised power of and torque, the same one found on the current variant, adding as well a new 1.4-liter turbo “Kappa” replacing the non-turbo 1.6-liter. Both engine will be hooked to a six-speed manual and a seven-speed dual-clutch automatic.

Later on, the new Veloster will also be introduced with a high-performance N variant, with performance parts borrowed from the freshly-arrived i30N.