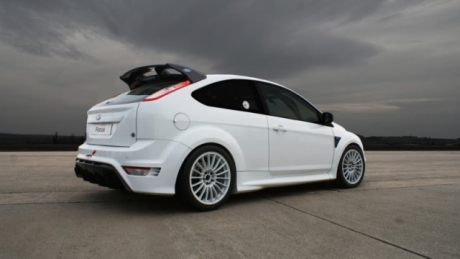 The title doesn’t tell the whole tale; the upcoming Nurburgring 24 hour race is to have an unusual contestant this year in the form of a donation Ford Focus RS from the automaker itself to the FH Köln Motorsport team. This particular motorsport team is special because if its members: 20 students from a university of applied sciences in Köln and a doctor in engineering, named Frank Hermann, as team leader.

The students and their professor have got until the 13th of May to turn the stock Focus RS they received into an endurance beast. For this task they also benefit of help from other big names in the industry, namely Castrol, Dunlop and TRW Automotive.

Despite the free car, the great sponsors and the bright leadership the team still has its work cut out as the Ford hot hatch has to go through a lot of changes to be race ready. There are two important things to consider: firstly the car has to meet the safety regulations posted by the race officials of the Nordschleife, secondly it should be as fast as possible and thirdly it has to withstand the pain of this dreaded endurance race.

The stock 300 hp engine may have enough power but it will need some serious reengineering to be able to work for 24 hours at racing stress.

Ford has announced that no matter the results of the race these students will have an extra chance at working for the company in the future.