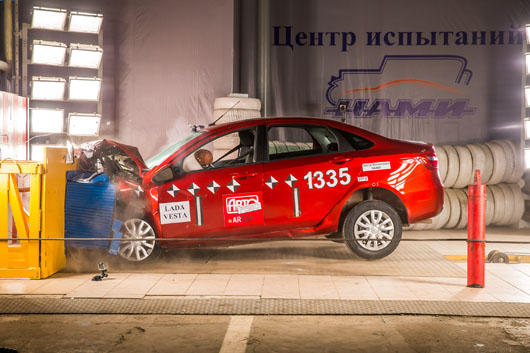 The main point is that Lada Vesta received the maximum number of stars in the ARCAP’s crash test. But first of all – who is ARCAP?

After a quick search on google, the mystery vanished away: ARCAP (Autoreview Car Assessment Program) is the Russian Crash Test Program owned by the Russian Autoreview magazine . Suddenly, I was wondering how real was the Vesta’s test result. Then, I noticed the Lada Granta’s test (described in Russian, of course), and it achieved only 3 stars. Next, a quick look at the results history revealed that 2010 VW Polo performed better than the recently-tested Vesta: 14.3 points vs. 14.1. I must admit I felt ashamed of my initial doubts.

The maximum achievable value is 16 points. They describe their testing procedures as similar to those used by IIHS, Euro NCAP, or ANCAP’s in frontal crash test, at 40mph. No side crash tests are involved in the test procedure.

I also must consider the fact that Lada Vesta is built on Lada’s B/C platform, developed in collaboration with Renault engineers. As the French manufacturer is well-known for producing some of the safest cars, it’s clear that the Russian model must be pretty safe itself. In the crash test description, ARCAP note that the cabin’s form was left almost unchanged, and the door gap was reduced by 4mm only. Also, the steering wheel’s and the pedals’ displacements were almost insignificant. The frontal airbags and the safety belts operated normally. During the last two years, the Lada’s engineers completed over 150 virtual 30 real crash tests.