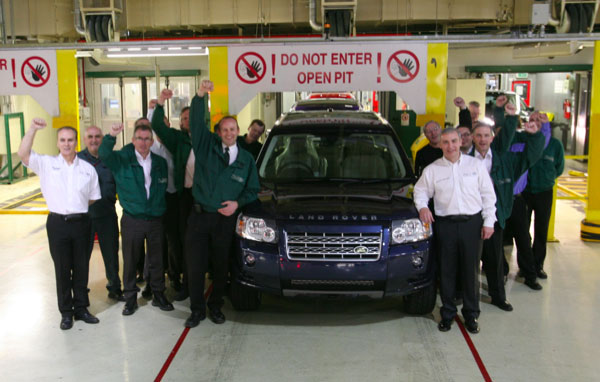 Land Rover Freelander 2 has reached 200,000 copies assembled in three years since the introduction of the model in the production series. Three years ago Land Rover introduced in the series production, the Freelander 2 model, and last days the Liverpool plant reached 200,000 units produced. The unit with the 200.000 number was received so enthusiastically by Land Rover employees but also by the director of the plant, Halewood Michael Straughan.

The unit bearing the number 200.000 is a Freelander 2 TD4 E, painted in Biscay Blue color and will arrive in a court of a UK customer. Land Rover Freelander 2 was the first SUV in the world to benefit from Start/Stop technology. From 2009 until now all versions available with diesel and manual transmission have received this technology.

“This achievement is due to labor at Halewood, which continually added improvements to the Freelander 2 model from launch until now to maximize customer’s satisfaction. I would like to congratulate the Halewood workforce on this achievement”, said Michael Straughan. From the beginning of the year until now Land Rover sales grew by 35.2 percent and the largest market for Freelander 2 remains the UK.