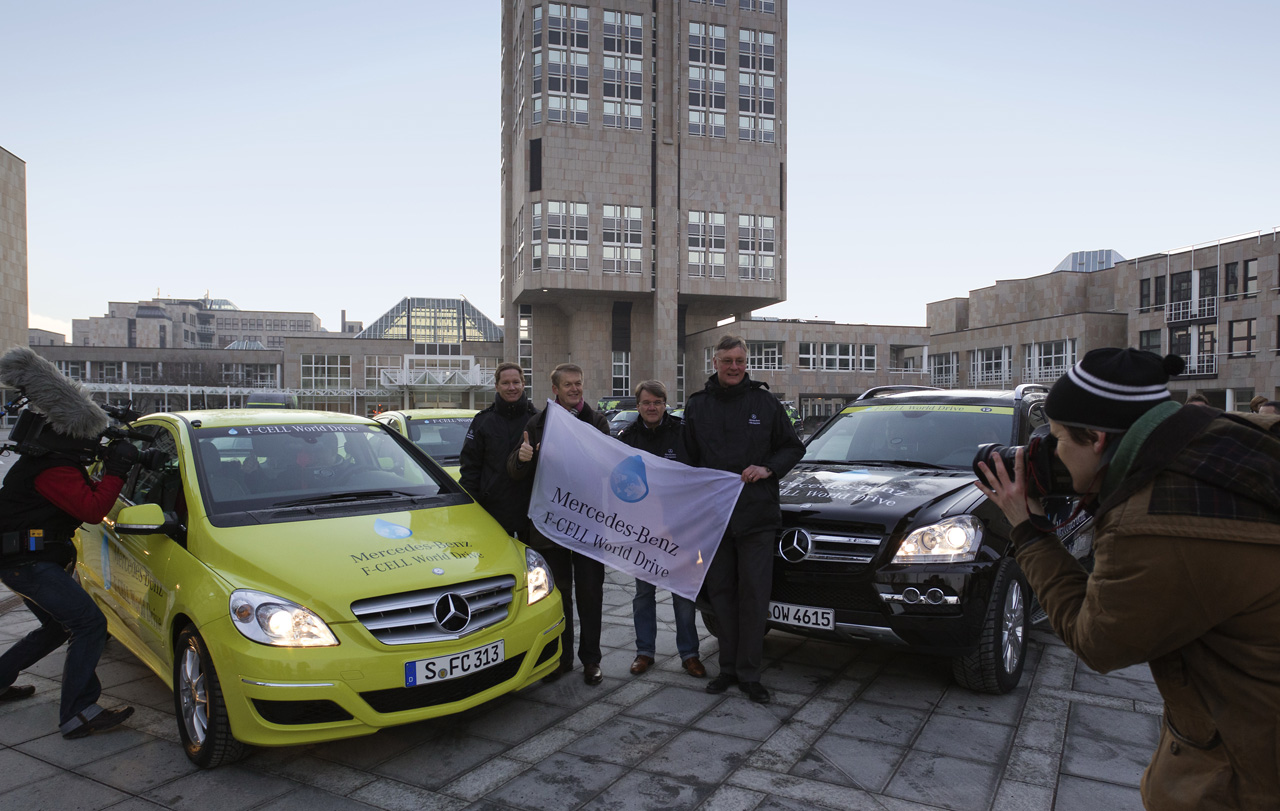 As some of you may recall, at the beginning of this magic year for Mercedes as a company filled with history and heritage, they began a different sort of trip around the world.

Titled the Mercedes-Benz F-Cell World Drive, it was to be a stepping stone in the history of the fuel cell powered cars just as the 125th anniversary was for Mercedes.

Putting together quite the convoy of Mercedes B-Class F-Cell vehicles and drive them around the world sounded like almost an impossibility and yet here we are a few months later to see the completion.

Even though the Mercedes B-Class F-Cell hydrogen powered hatchbacks are supposed to have went round the complete circumference of the globe, the total mileage done is around what a normal commuter car would cover in a year.

According to Mercedes, the F-Cell World Drive tour raked in 18.641 miles for each of their hydrogen burning B-Class.

The tour started and ended at the same location, the parking lot in front of the Mercedes headquarters in Stuttgart.

The whole point in Mercedes doing this was to prove to the world about how fuel-cell powered vehicles can become a viable alternative to “traditional EVs” and internal combustion vehicles.

Mind you, even though the fuel cell technology and its mixing with traditional motorcars has been going on for several years, technically at least, these vehicles are still in the early stages of development.

At the moment not only are they plagued by the very high cost of making them, they are also faced with very high running costs but not for the reason you might think.

With very few moving parts, the running costs and repairs should cost a fair deal less than any of the already publicly accepted sort of transportation.

Breaking cars like the Mercedes B-Class F-Cell is actually what makes them. Hydrogen production and pricing aren’t by no means competitive to traditional energy resources and that’s not the only problem.

Hydrogen filling stations like Mercedes B-Class F-Cell would require in order to maintain normal operations are still very rare and face convincing the states and lawmakers towards investing billions in infrastructure.

Getting back to the Mercedes-Benz F-Cell World Drive, it took just 70 days to complete but there’s a catch. On many of the occasions at hand, it took the usage of a mobile filling station.

Now, when you’re Mercedes and have their financing, such a thing isn’t troubling, in the real world however that’s pretty troublesome.