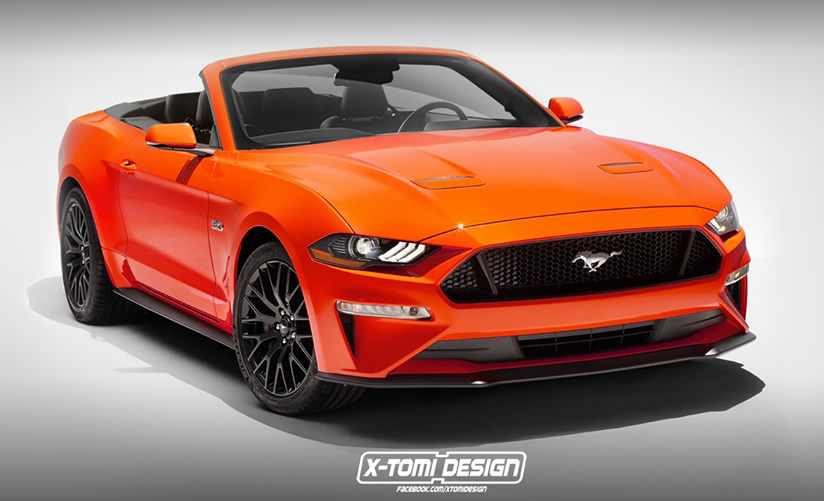 Ford recently released the official images with the all-new 2018 Mustang, which is actually a facelifted version of the current model, and now we have the first unofficial rendering with the GT Convertible, slated to arrive on the market next year.

The 2018 Ford Mustang GT Convertible rendering is signed by no other than X-Tomi Design and is giving us a closer look on the upcoming model.

It basically shares its similarity with the Mustang model only that it comes with a chopped roof, and chances are that the real GT Convertible will look exactly like the one depicted in the rendering.

There aren`t any official details and information concerning the GT Convertible`s design and interior tweaks, but rumors state that it will share the same features as the factory 2018 Mustang. And since we are dealing here with the hardcore GT version, the model will stand-out from the crowd with increase power and torque.

The interior of the GT and GT Convertible will also look alike, meaning that they will boast with the latest technology, including a 12-inch all-digital instrument cluster with lots of safety features – Pre-Collision Assist with Pedestrian Detection, Lane Departure – adding other gizmos as well.

Speaking about performance, the 2018 Ford Mustang GT and the GT Convertible as well, will be powered by a 5.0-liter V8 engine, hooked to an updated manual transmission with twin-disc clutch and dual-mass flywheel, which will increase the cars` boost. The top of the line versions will also receive V8 engines, paired to a high-performance ten-speed automatic transmission.