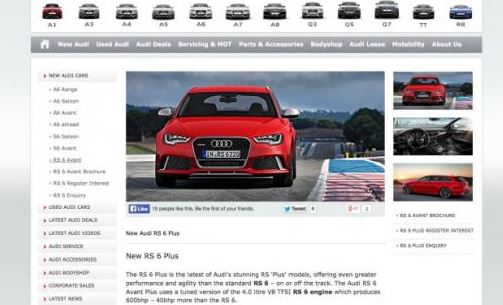 The new Audi RS6 Avant Plus is ending up in our news again, after the sports car was rendered in some details on the web, ahead its official debut which is due in a few months.

The render with the Audi RS6 Avant Plus is actually the unofficial announcement made by an UK Audi dealership, which proves that the German automaker is already preparing the model for the market.

The details were quickly removed from the web, but we have already managed to take a look inside, thanks to the guys from GT Sprint.

Thus, in terms of technology, the Audi RS6 Avant Plus is coming with new suspension and braking updates, a revised gearbox, carbon fiber components and more.

Under the hood, the Audi RS6 Avant Plus will be powered by the same 4.0-liter TFSI V8 unit, also found on the present model, developing a total output of 600 horsepower.

A good news for the Audi`s fans, especially those who love the Plus variant, the model will not come in a limited edition on the market, the way happened with other Audi “Plus” models.