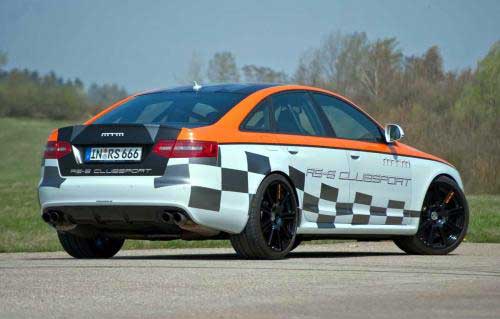 German tuners from MTM created an aerodynamic and performance package for the Audi RS6. With its help, the German model delivers 720 horsepower. MTM tuning house prepared an aerodynamic and performance kit for Audi RS6, that was called Clubsport. At the exterior, tuners have modified the front bumper of the car, added an air deflector on the back of the German model and mounted 21-inch black rims. Also tuners from MTM replaced the suspension with some of they own production.

Inside, the Audi RS6 received a set of carbon fiber Recaro sports seats, seat belts in six points and a roll cage. In terms of performance, tuners at MTM have recalibrated the ECU unit, have installed more efficient air filters and replaced the exhaust system.

Through these changes, the 5.0-liter V10 engine of Audi RS6 produces up to 720 hp and develops a maximum torque of 785 Nm. The maximum speed of Audi RS6 Clubsport varies between 279 km/h and 340 km/h depending on the tires that were used.