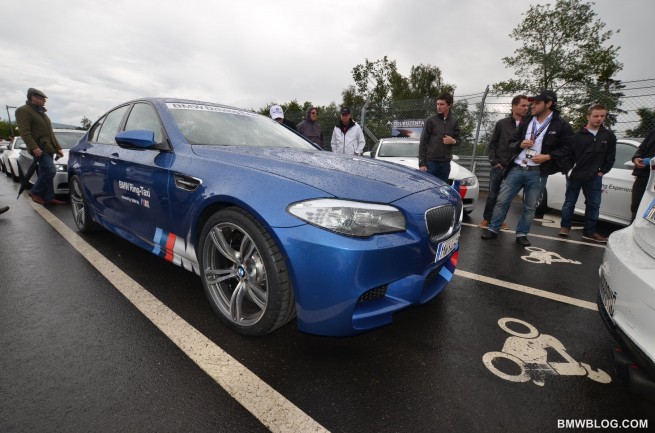 It seems like the Bavarians at BMW have a thing for unusual decisions, especially ones that include the Nurburgring race track and their really fast cars.

After having a laugh creating the BMW M3 pickup as an April Fools’ affair and testing it round the Nurburgring, there was something they said about the new Ring Taxi.

Having retired the E60 BMW M5, the company founded Ring Taxi duties were to be taken over by the E90 BMW M3, sadly, without Sabine Schmitz.

A recent bit of news that was picked up around the Green Hell claims that the M3 solution isn’t likely to last. That isn’t because the E90 BMW M3 can’t handle the job, but because there’s a replacement on the way.

This replacement is probably the most interesting car to come out of the Bavarian company’s design and development studios for several years, the F10 BMW M5.

To further sweeten the deal we’re told that when the new BMW M5 hits the Nurburgring as a Taxi not only will it have this special livery it may even include Sabine Schmitz’ services behind the wheel.

Otherwise, the future Ring Taxi is going to be the same as a standard 2012 BMW M5. That means you’ll be a passenger in a sports sedan that is powered by a twin-turbo 4.4 liter V8.

That engine develops 560 horsepower and 502 lb-ft of torque all of which is sent through a seven speed dual clutch M-DCT automatic gearbox towards the rear wheels only.

On a demanding track like the Nurburgring, you probably won’t hit that sort of speeds but it’s still going to be quite the interesting ride regardless of how fast things move out the windows.

The unveiling of this M5 and the new “racing” livery took place at the M Festival in Germany and I suppose there isn’t any more proper venue than that.

No precise date was announced but we’re told that the F10 BMW M5 will start its new job at the Nurburgring Nordschleife in 2012.