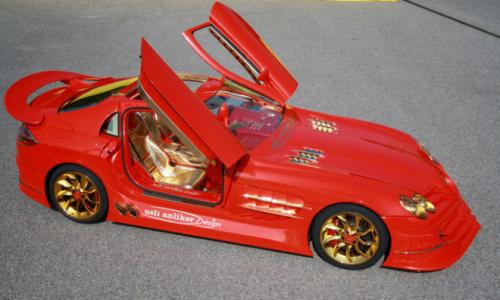 These things are getting ever more rare these days but we know they’re still out there. People with more money than taste hit big again.

An idea created by somebody who obviously has no style, this “special” Mercedes SLR McLaren is loaded with gold for the interior and a few details of the exterior.

If only that was the the whole story. Sadly, this poor “McMerc” got itself one of the worst hypercar makeovers in the history of kitschy owners.

To begin with, the kitschy Mercedes SLR McLaren gets off to a bad start via the re-trimming of the body kit.

The front looks more like a wedge than before, the rear wing looks as if it really was drawn on by an 8 year old and the entire side profile makes it difficult.

Difficult to describe how bad it is. The same applies to the rear of the Mercedes SLR McLaren and its new sun roof.

But if the exterior appearance, the one with gold covered wheels, headlights, exhaust and a cherry red paint is bad, wait till your eyes burn having watched the interior.

This is where the same cherry red paint meets with the same disgusting looking 24 karat gold to cover the entire dashboard and steering wheel.

As for the rest of the interior, the re-upholstered seats, center console and even the foot well is covered in gold. Really, no matter where you try to look at this SLR McLaren, it’s simply awful.

To make things worse, they’ve actually tuned the powerplant of this uber-GT cruiser to the point where it develops 999 horsepower.

All of this stuff, according to creator, a chap called Ueli Anliker, makes the gold Mercedes SLR McLaren cost no less than £7 million (roughly 9.2 million USD).