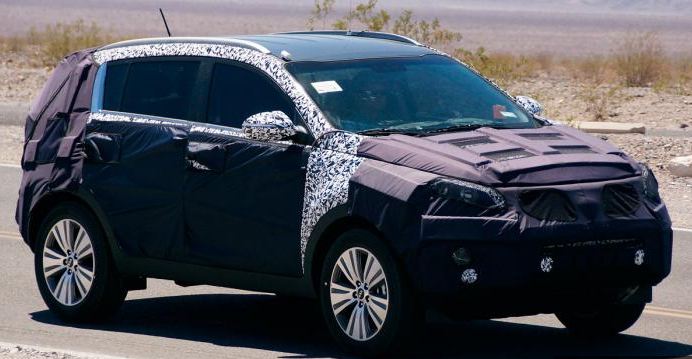 While we all know the Kia’s Sportage veteran, entering the market back in 2010, we were anxiously waiting for a novelty.

Luckily or not, the novelty does not regard the upcoming revised unit announced for 2014, but a Kia Sportage facelift.

In case you knew nothing about it it’s because they have been trying to keep this Kia Sportage facelift a secret over the ocean, in USA.

As news travel with the speed of light, the first spy photos with the upgraded SUV were brought to light. We peeked and what did we see?

Not too much because of all those fabric folds that were hiding the new Kia Sportage underneath it. From a distance however, it looks like the unit will have some upgraded lighting units, revised bumpers plus a brand new grille.

As for the interiors and what is under the hood, we still need to wait. Officials only let us understand that it will enter as a front wheel drive, the AWD being available optionally.

Even so, we are confident that more spy photos of Kia Sportage facelift will come to light, sooner or later.