A crossbreed between a BMW 1 Series and the M3 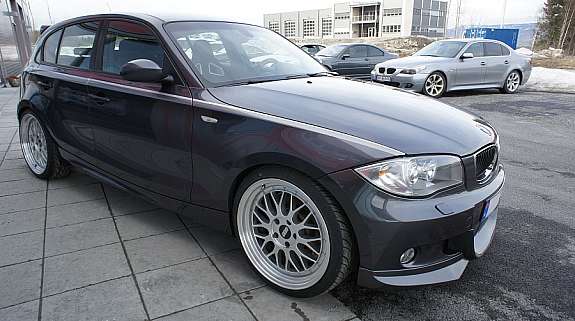 There’s BMW fans, and then there’s BMW fanatics, the sort who create cars like this heavily modified 1 Series.

BMW decided to make the 1 Series M Coupe as a nostalgia moment from the time when the BMW M3 was a lightweight, simple and fast car.

An admirable intention, but since they couldn’t really make it faster than the current generation of the BMW M3, the 1 Series M Coupe was fitted with an engine some say could’ve been more powerful.

Car companies may not shoot themselves in the foot but BMW 1 Series owners certainly want theirs to be hotter, which just might make a business case for this insane creation.

Built in Norway, while it looks like a relatively normal BMW 1 Series it so isn’t.

This is because the engine it packs comes straight out of a bigger brother, the BMW M3.

Imagine that, a BMW 1 Series with a 4.0 liter V8 under the bonnet and as if that wasn’t enough, it’s been tuned to a level of 435 horsepower.

All the other modifications done are simply there to accommodate the engine as there is the same gearbox and differential setup as you may find in the E92 BMW M3, along with a modified suspension.

It’s so crazy it’s unbelievable, performance levels clearly beat those of the M3 since you get 25 more horsepower and a whole lot less weight.

Since we’re told it’s now called the BMW 1 Series M Hatch, it’s got a new price. In Norway, this incredible car costs the equivalent of $135.600.