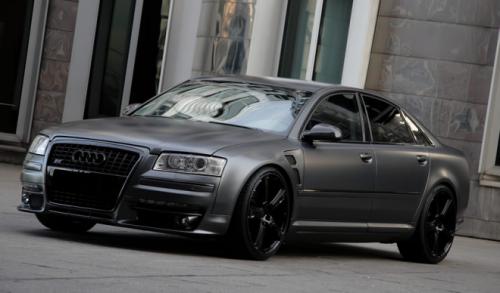 The Germans have recently unveiled a new version of the Audi A8 but there’s plenty of fans of the previous, D3, generation out there.

Among them we find infamous tuners, Anderson Germany, who’ve recently unveiled the Audi S8 Superior Grey Edition. The upcoming S8 will be quite the car but it will have something missing from its life.

Due to emissions standards and such, the soon to be unveiled version of the Audi S8 will use turbocharging and a smaller engine.

The lovely 5.2 liter naturally aspirated V10 engine that Audi got off Lamborghini, normally develops around 450 horsepower.

Now however, thanks to the tuning company’s fiddling with the engine now develops 508 horsepower, a bump of nearly 60 extra ponies over the standard option.

The exterior gets updated with a matte grey wrap around the new full body kit. The wheels are 22 inch black painted alloys and they’re wrapped in Hankook Ventus tires.

The tinted windows complete the final piece in the massive murdered out sedan’s life, as much as the enhanced performance will be loved by new owners.

No new acceleration claims have been made but the Audi S8 Superior Grey Edition can now hit a top speed of 186 mph.

Those willing to feel special inside their car will be glad to sit inside one of these S8 cars, will get the wood trim replaced with carbon fiber and the leather reupholstered.