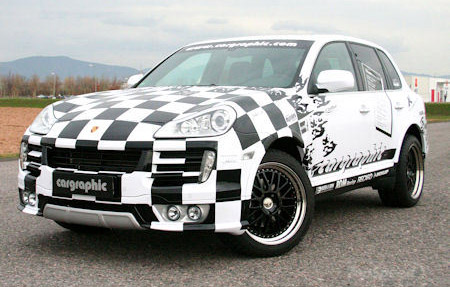 The engine of the Porsche Cayenne modified by Cargraphic is the same diesel series version found on the German model, but it was upgraded to develop 290 horsepower. The increased power was doubled by a modified suspension and a lowered ground clearance.

But the exterior is the most interesting component of the Cargraphic kit for Cayenne. Besides the 21-inch wheels with Dunlop SP Quattromax (295/35 R21) tires, the stainless steel endings of evacuation and improved front spoiler, the Cayenne unit prepared by the German tuner stands out by the black and white foil applied on the front of the body.