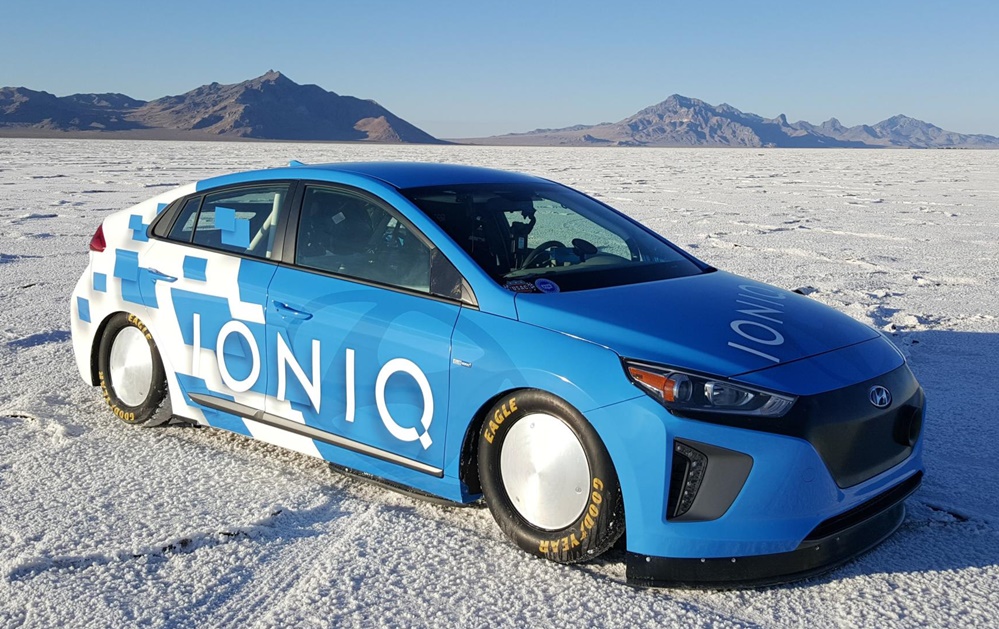 It has been a while since we last heard about the Hyundai Ioniq but the await was well-worth it, as the Hybrid version was recently highlighted in a video while braking the land speed record, becoming thus the fastest hybrid version on land.

We are looking here at a specially-equipped Hyundai Ioniq Hybrid, getting ready to tackle the Bonneville Salt Flats, the grounds where the car managed to reach 157.825 mph, which is really a mind-blowing for such a vehicle.

The special modifications that allowed such an impressive record refer to the new aerodynamics and the Nitrous-oxide power booster. Unfortunately for speed geeks, the model will not be offered in the United States, starting next month, with the Nitrous motor.

Speaking about the hybrid`s impressive land record speed, Mike O`Brien, Vice President at Hyundai Motor America has declared that the company is extremely proud of such an amazing achievement.

“Our engineering team really pushed the limits to set the new segment benchmark while demonstrating the impressive durability of the entire Ioniq vehicle platform. We expect this will be the first of many accolades for Ioniq,” O`Brien also concluded.

The Hyundai Ioniq Hybrid seen here comes with the new 1.6-liter GDI four-cylinder petrol engine, with 103 horsepower, along with an electric motor which adds 44 horsepower. The entire hybrid powertrain is hooked to a lithium-ion polymer battery. The 141 horsepower are sent to the wheels via a six-speed dual-clutch transmission.

Besides the hybrid version, the all-new Hyundai Ioniq will also be able in a full-electric version powered by an ultra-efficient lithium ion-battery, while the gasoline/electric hybrid`s power will be generated by gasoline and the on-board battery, which charges while the car is on the move.