Infiniti has launched the 2011 QX56 today 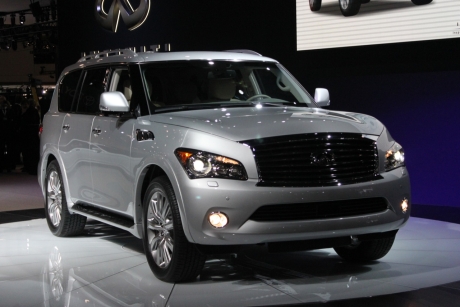 The currently happening New York Auto Show hosted the official launch of Infiniti’s large luxury SUV, the QX56 today. As pictures tell the story, the new QX56 has had a major redesign from the old one up and as pictures don’t tell the story there’s a lot of interesting things that the eye cannot see.

The new car has been entirely redone from the platform up and now features a high stiffness frame structure purposed in a better all round feel in what concerns noise, harshness and vibration. While this may bring the big QX56 to a new level of comfort it’s not enough to make a drive in it feel interesting.

This is where the other “invisible” features come in. Infiniti’s newest creation has a 5.6 liter V8 with DIG and VVEL. While the acronyms themselves aren’t enough to make you want to get up early in the morning and drive it, their effect is: 400 horsepower, 413 lb-feet of torque and a 10% save in fuel costs over the previous model thanks to coupling to a seven speed automatic. The drive train is so capable that it can carry an extra 8500 lbs in weight when towing.

The pricing announced for the new 2011 Infiniti QX56 is $56.700 for the two wheel drive version and an extra $3100 being asked for the all wheel drive on. Deliveries are set to begin this summer.