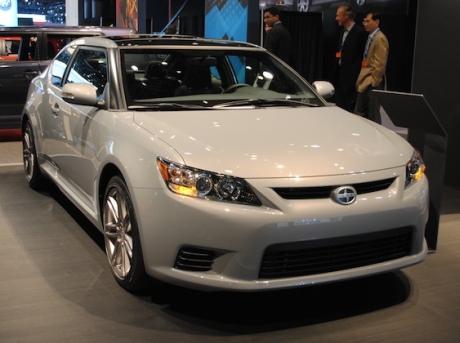 More from the New York Auto Show as today Scion has announced that 2011 subcompact iQ will go on sale in early 2011 and that the tC model will be available last this year. The Scion iQ is mostly a rebadged Toyota IQ with key presentation features of intelligent solutions to the packaging of the car and great fuel economy while the tC is bringing some more aggressive looks, better performance while at the same time better fuel economy comparing to the previous version.

As said before the iQ shares the platform (and a lot more) of the Toyota IQ and features more than 30 mpg from a 1.3 liter four pot delivering a smudge more than 90 horsepower that’s mated to a CVT gearbox, 3+1 seating arrangement and some toys inside.

The tC however has been redesigned to make Scions sports coupe… more sporty. At the heart of any sports coupe there’s an interesting engine and in this one there’s a 2.5 liter inline four with dual VVT-I that puts out 190 horsepower which is a bit more than the previous model, just as torque. This is achieved via usage of a new set of timings, a new intake manifold and a new exhaust. Add all these together and what you get is more of everything. As for gearboxes you get to pick between a manual and an automatic, both six speed.

The newest Scion tC has a lot of strong points in an improved premium feel of the interior with a new three spoke steering wheel, nicer seats and a center console that features stuff like USB written on it is definite to keep attracting the younger customers that form most of Scions buyers. Considering that this is a car that may see some unpleasant situations Scion have equipped it with ABS, VSC, TRAC, EBD and BA. All these letters are there to help you stop, corner and keep clear of roadside objects.

Pricing for either of these models is yet to be announced.