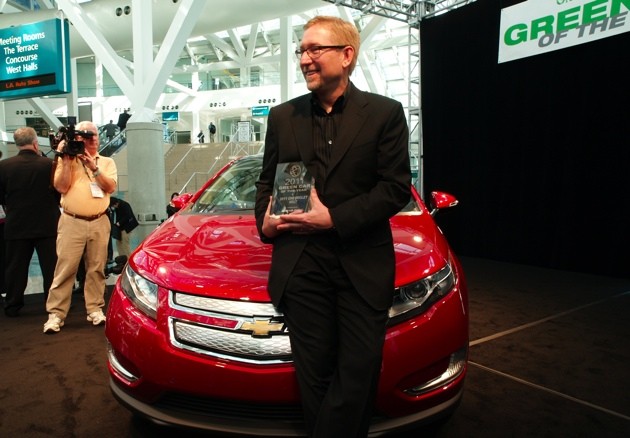 As it is a proper motorized event, the Los Angeles Motor Show is also host to a raft of contests and awards. Possibly one of the biggest surprises there was in the Green Car of the Year section.

I’m saying this is a surprise because the 2011 Chevrolet Volt was crowned the winner.

After two years of diesel success for the VW Group with the VW Jetta TDI and the Audi A3 TDI a hybrid gets the crown again. Except the Volt is not a Hybrid, it’s actually a EV with range extending capabilities. Right.

I’m not a fan of the Chevrolet Volt and I keep failing to see why it’s gettin’ so much hype and success. It’s been promised as a Messiah and it’s going to be sold as an upgraded Prius with a GM badge on top. Given the fact General Motors just hit a record IPO at about the same time the Volt won 3 awards in 3 days the surprise of the Volt winning is starting to wash off.

The competition the 2011 Chevrolet Volt pushed away was the Nissan Leaf, the Lincoln MKZ Hybrid, the Hyundai Sonata hybrid and the Ford Fiesta. Now, to be fair, I can see why the Lincoln MKZ and the Fiesta didn’t win as one is a big fat guy and the other has no hybrid option. I can’t however see why the Volt beat the Sonata which is cheaper, more practical and without many differences in economy. And as for the Leaf which is a complete EV as opposed to a range extended one, I find that this is the real surprise of the Green Car of the Year.