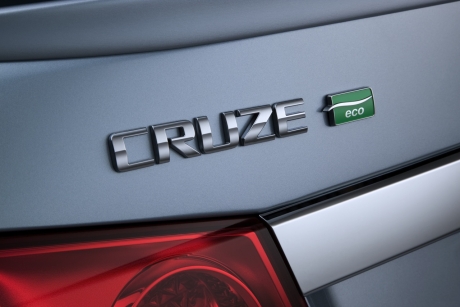 The Cruze Eco is a version of the small sedan is the most eco friendly (and pocket friendly in running costs) one yet as it features a highway EPA estimate of 40 mpg. This number is achieved mostly by reengineering certain parts of the car to get hybrid-like mileage without the high purchase cost.

First up is the engine, it is a 1.4 liter engine with a turbocharger, variable valve timing and Ecotec written on top of it. Add all those features together and you end up with a car that has Eco written on the back and yet produces nearly a hundred horsepower per liter as the engine churns out 138 hp and 148 lb-feet of torque.

Another important part of the equation is the gearboxes on offer as you get to pick between a six speed manual and a six speed automatic, both having been optimized for fuel economy. Despite this, the manual version is expected to hit 60 mph in 10 seconds and a second less for the automatic.

The power train is impressive but the bodywork has some features that are even better. The aerodynamics have been improved by removing some of the openings in the front grille, adding high speed shutters for parts of the lower front grille, usage of underbody panels and adding of a discreet rear spoiler.

Couple all these together with a lowered ride height, some special light alloys and very low rolling resistance tires and you end up with a cheap eco friendly car that is also powerful enough not keep performance oriented customers happy.

More info on this model will be available next week when it’ll be presented at the New York International Auto Show.