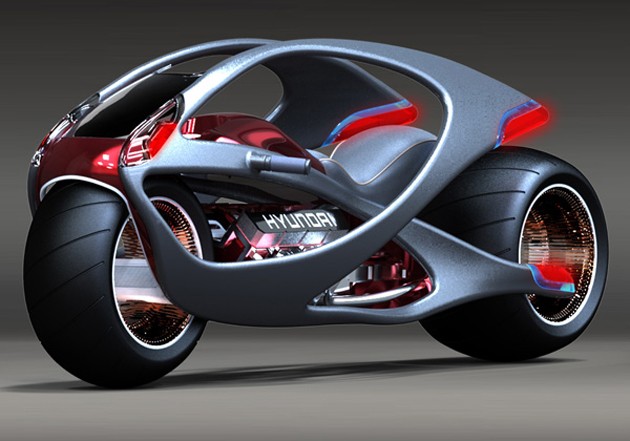 Whereas the Koreans at Kia seem to be sticking to their guns, preppin’ the Soul for 2012, their co-nationals at Hyundai are promoting something less predictable.

It’s a new bike concept and while it was made for Hyundai, it didn’t really take birth within Hyundai.

This odd looking bike concept is the vision of Designer Min Seong Kim of what Hyundai’s future holds. After all, from going down a size to cars, why not do it again and stop at two wheelers?

The proposed Hyundai bike isn’t a concept just by name and unusual appearance, it’s also unique from a less usual, in this field, aspect.

Hyundai’s Concept Bike is supposed to be made out material that can tighten or relax, thus helping improve handling and pretty much every behavioral aspect the rider may encounter.

Mr Kim claims inspiration for this “material” and its functionality came from the human muscle and all of its complex functions throughout the human body.

Another interesting part of the newly designed Hyundai bike is how it uses a V6 engine, not exactly the most common layout around.

It may be a concept and it may never happen as a production bike, but the bike designed with Hyundai has served its purpose, it has captured our imagination.